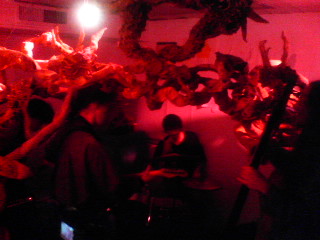 A moment of silence for Helga, my formerly indestructible HP that conked out on me. I had it about two months shy of 8 years, so I can’t be mad and getting above and beyond my money’s worth of it. I’ve been saving up for a shiny laptop for while and today I bought another HP tower that I’ll pass along to my mom once I get my piggy bank ready for the laptop buy. A $400 computer was still lightyears away from what I’ve been working with all this time. Luckily, I’ve been slowly migrating my info to my external hard drive for a few months now, so no big info loss. I’m still vaguely confident that I can transfer settings, but it remains to be seen. That poor computer survived 8 years of moves, dust, good writing, bad writing, many IM conversations, angry emails, overlong blog posts, music downloads, and days and nights of overwork. The new computer clean slate feeling is kinda interesting. I feel like everything happening around/with me right now has something to do with salvaging the good pieces and/or rebuilding from the bottom. I don’t mind really. Change is a very good thing.
The other week found me venturing into Midtown on a Saturday night. Very strange since the last thing I do when I leave it on Friday evening is clamor for more. I was off to check out this new to me band that I’d been digging for more info about. The show was in this art gallery, hidden in the shadows of office buildings and delis and theater row. The space was transformed into a maze with sculpture and writings decorating the walls. I wandered in, looking for the music that was promised to be at the end. I saw a band, not the one I was there looking for, sitting around and taking apart equipment. I looked at them, they looked at me, and wandered away. I came across this guy, looking like an antsy hipster complete with the shaggy hair, hoodie, and classic sneaks (shelltoes in this instance), and we struck up a stilted conversation as I asked where the refreshments were hiding. Our chatting would reoccur as the night passed. The place was on the miniature side. Three turns and you were either out the door or back where you started. I tried to wait patiently for everything (the set to start, the drink girl to replenish the supply, a lightning bolt to hit this girl who started some story with “not that I’m a racist, but…”), but mostly aimlessly walked around and around. That guy was from SC visiting for the week and one pass we talked about the upstate region and its little cities and towns. I felt a twang slip out and I missed my old summer trips for the quickest of seconds.
And then the band played, mostly acoustic with the music going low as the mike-less singer sang. I was mesmerized by the bass, all strings and neck. I stood in the corner on a bucket and tried to keep my balance and take a pic or two with my shitty camera phone. Almost at the end, there was competing noise from a sax player and drummer playing out front on the street. They wrapped up quick and suddenly and everyone ventured outside. The discordant noise brought down a tourist to complain about her lack of sleep. She walked about and fumed helplessly and everyone watched the showdown between her and the saxophonist amused. I used the lull to stroll off the next destination. There were no more fireworks to be had there that night.
I had a choice of parties to go to with one big possible drawback to them all. I was playing the shell game and trying not to be where The Boy could end up. But true to form, I paid my money and bought my first drink and looked to my left to see his friend and then him sitting there. Figures really. I kept to myself and this random I knew from the neighborhood where I used to work and he hovered around like the mosquito you can’t quite kill and finally just ghost. I coped with the Long Island Iced Tea special and chugging to calm my nerves. Too bad my stomach wasn’t so happy as time went on. I spent the next day at home lounging like Sheba and considered how fun it would be to live somewhere where my past wasn’t always been thrown in my face.
Tuesday, I attempted to see a show by the old faves, but fatigue and the noxious crowd turned me back. Instead I went to the 2nd show of the week by Saturday’s group. There again was that guy from SC. We had another strange conversation and he confessed that he was at the show for lack of a better option and stir crazy. I gave my condolences on that and perched myself by the bar hoping for a good watching angle. It was a good show again and I was happy that I got it together to see them. That guy had disappeared before the show was over. I hope he had a good trip.